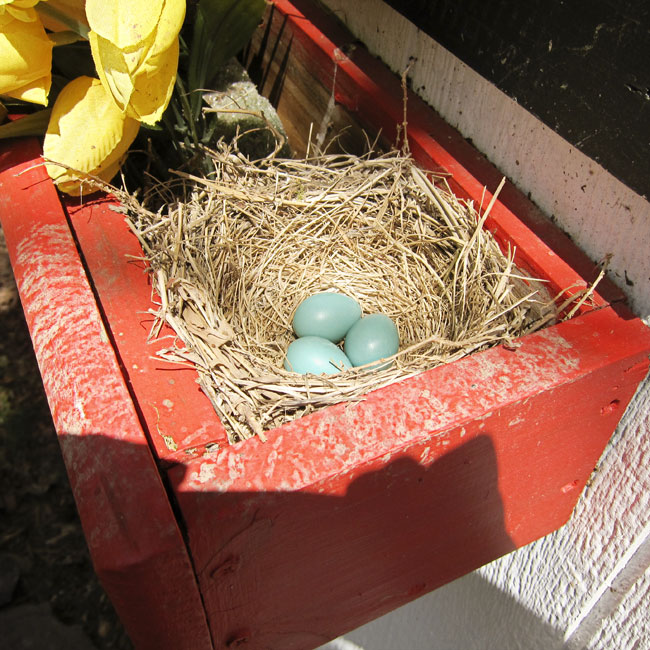 After dragging her tail feathers for about a week, Zelda finally got ahead of me.  Saturday she had two eggs (one more than I guessed).  Easter Sunday I watched her sit on the nest with a look of concentration.  It wasn’t mid-morning like the book said, but about 8:15.  (If you’ve been up since dawn hunting worms, 8:15 is mid-morning).  She flew away after about twenty minutes.  Later she came back and settled herself for a long stay.  I figured she’d laid her last egg and was now incubating.

Sure enough when I checked that afternoon, three beautiful eggs lay in the sunny nest.

Oh, I thought, I hope she stops at three.  Five in the family would be perfect.

I always thought families of five was the perfect number, a notion that probably came from an old health textbook of my sister’s called Five in the Family.  Back in the Dark Ages, we bought our textbooks instead of renting them.  My sister left her books behind and I read them and drew witches in her old spelling book. 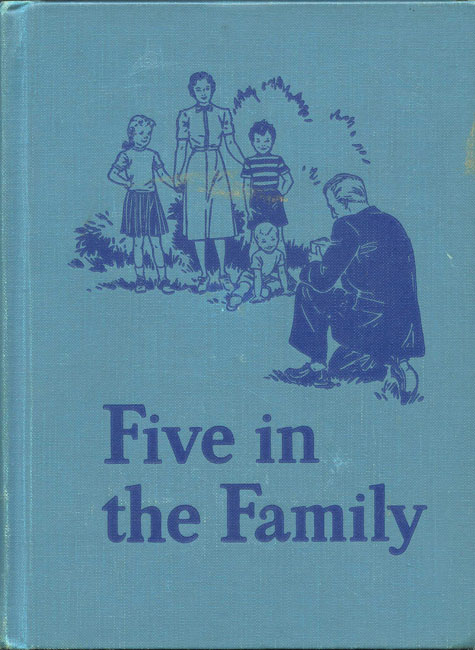 The family in Five in the Family consists of Mother, Father, Sue, Jack, Tommy, and Jack’s puppy Spot.  The front cover shows Father taking a photo of the others (using a Brownie box camera).  Each section features a different member of the family.  At the beginning are “photographs,” giving the book an album look.

I suppose that was part of my fascination with this book.  It certainly wasn’t the writing:

It was Jack’s birthday, and the family was looking at pictures of him.  “Oh!” laughed Jack.  “Here I was on my very first birthday.”

“This is how you looked at three,” Father said.  “And here you are at five.”

“And now you have another birthday, Jack,” said Mother.  “Dear me!  How fast the time goes!”

The stories are all syrupy because it is, after all, a reader on health.  For Jack’s birthday party, “There were hot soup and sandwiches, milk, and apples.”  If I’d been invited to that party, I would have stomped out.

Despite the book being soaked with insipid dialog like, “Oh, Daddy, why didn’t you tell me before you took my picture?  Then I could have been standing straight,” I read this book over and over, memorizing the illustrations.  I wanted to be in that family. 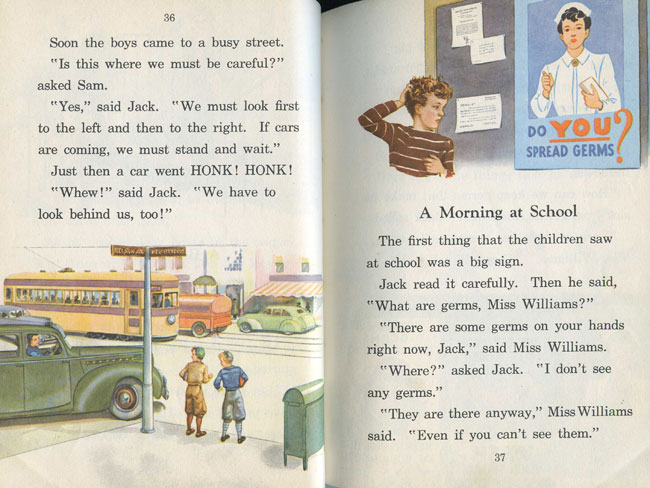 Last year a new family moved across the street from us.  Mother, Father, a boy, two girls, and a dog.  Five, the perfect number.  I watched them out the window on school mornings.  The mother walked the boy and the oldest girl to the bus stop, carrying the youngest girl.  She kissed them goodbye and waved until the bus rounded the corner.  In the afternoons, the boy and girl hopped off the bus and raced home, eager to return to their safe, cozy nest.

I remembered how I stood at the bottom of our driveway alone, waiting for the bus to come down a busy highway.  At the end of the school day, I walked slowly up our long steep driveway.

Last weekend I glanced out the window (we have lots of windows in this house—I don’t really spy on the neighbors!).  The father spread a blue blanket under their blossoming Bradford pear.  The kids came out carefully carrying a glass and plate.  The whole family ate their lunch in the front yard, the dog bounding from one to the other.  Later the father helped the youngest roller skate and then played catch with the middle girl.

I thought how well-loved these children are, how good and kind their parents are.  Such a contrast to my own childhood.  It wasn’t that I wasn’t loved.  I wasn’t well-loved.  I know the difference.  And I knew it then.

Five in the family.  Scott and Zelda would have three children.  Two boys and a girl.  I would name them Bill, Howard, and Irene, after my brother-in-law, stepfather, and mother.  I like the idea of them coming back as robins.  And I decided to throw a little birthday party when they get here—with cake and ice cream, no apples or soup or milk. 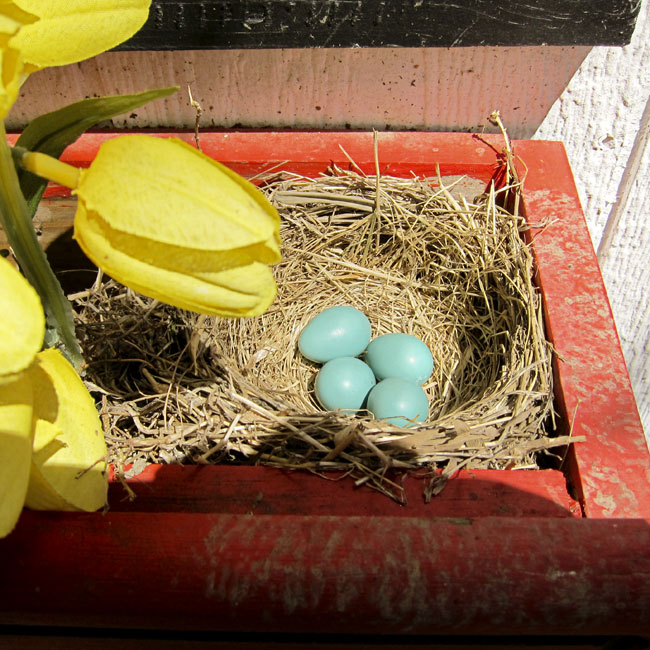 Then next day when I checked the nest, Zelda had left me a surprise.  A fourth egg.  Six in the family is okay, too.  I’ll name the new robin Esther, after my husband’s mother.

They’ll be here in less than two weeks.  Two weeks in the nest.  And then they’ll be gone.  How fast the time will go.