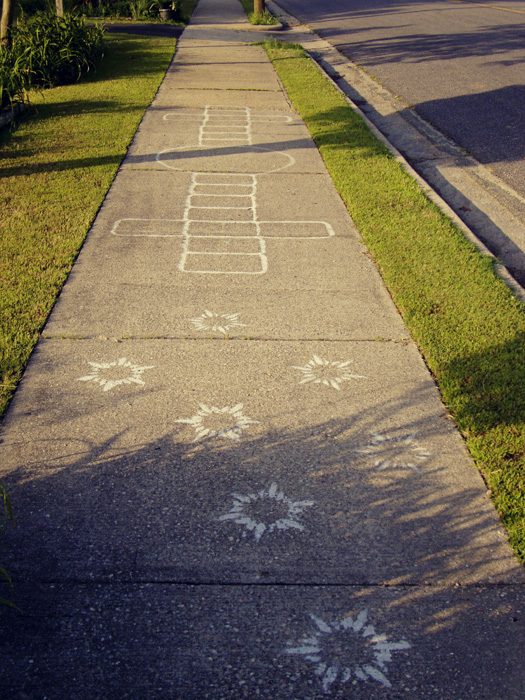 Life is a child at play, moving pieces in a game; the kingdom belongs to the child.  Heraclitus

Saturday. A beautiful day to drive to a library event.  My GPS guided me to a highway I hadn’t been on in over 25 years, Rt. 28 between Manassas and Centreville.  Good thing I had GPS because I was lost on a road I’d traveled thousands of times growing up.

Abandoned children’s games in the little side street, the street of Lost Steps, with the chalk lines of hopscotch in the late afternoon sunlight and shadow.  Charles Simic

Not that Rt. 28 had ever resembled Rodeo Drive, but blaring development made me grip the steering wheel as though I were hurtling through purgatory.  Only Kline’s Tasty Freeze, an old-fashioned walk-up dairy bar in the same location 70 years, served as my personal global positioning system, my landmark anchor.

In antiquity the game of hopscotch symbolized the labyrinth in which one kicked a small flat white stone—one’s soul—toward the exit, the vanishing point with its cloudless sky.  Charles Simic

As a kid, I traveled this stretch of road in all weather, every season, all times of day and night, in the backseat, the front seat, and, as a teenager, a few times in the driver’s seat.  Yet in my mind, I’m nine years old in the backseat of our fin-tailed gray Chevy Biscayne.  We wing toward Centreville on Lee Highway—the first view of the whale-shaped Blue Ridge Mountains—and turn left onto Rt. 28, heading to town.

It’s Friday evening in early summer, payday, and the road is the same purplish-blue as the mountains it runs parallel to.  Small white houses are dwarfed by “snowball” and forsythia bushes.  Forsythias, past their bloom, spray green fountains, but hydrangeas burst with rockets of blue and lavender.  Telephone poles advance and retreat, unfurling scalloped wires like holiday bunting.

Alone in the backseat, I am queen.  I own that throne of checked buttoned plush, rule both windows, possess the houses and mailboxes my coach passes like royal subjects.  The road is familiar and comforting in its sameness, yet any second something new could swim into my vision.  On the way to Manassas, I am watchful with anticipation.  We bump over the Bull Run bridge into the next county.  The river flows slow and brown between red clay banks.  My stepfather mentions a good fishing hole he used as a boy.

On the way home, I’m drowsy with content, clutching a new Little Lulu comic book, chewing one chocolate-covered caramel Pom-Pom after another from the five-cent box.  My mother and stepfather murmur in the front seat.  Rt. 28 is darker.  Telephone poles blur by, the hydrangea blossoms are bowed with dew.  The distant mountains slumber.

Saturday when I crossed the county line, I never even glimpsed the Bull Run River.  I didn’t see the mountains, only high-rises and vast shopping centers.  A labyrinth of overpasses confused the turn onto Lee Highway.

The German variation of hopscotch is called Himmel und Holle (Heaven and Hell). The player throws the stone in the first square (Earth), then hops to each square after kicking the stone ahead, avoiding the square of Hell, trying to reach the last square, Heaven.

Stopped at one of the ill-timed red lights, I sat, a solitary soul, in my truck.  So did the person in the car next to me.  And the person in the car in front.  We were all sitting on the same road at the same time.  It occurred to me that no one else noticed the changes along that road, no one else was upset by them.  It didn’t matter what was there before, only what was there now.  Moreover, we were all active in creating those changes, simply by idling a few minutes in that spot.

Heraclitus said we can’t step into the same river twice.  Every time I journeyed down Rt. 28 and back again, my presence altered the landscape.  And the landscape altered me.  The road was not the same, and neither was I.  But what nine-year-old wants to think about change unless she initiates it?

Let me sweep aside the clutter of development.  Let me be nine and queen of the backseat on my purplish-blue road.  Let me tell my life again, the way I want to.

10 thoughts on “Street of Lost Steps”