Alligators in the Swamp 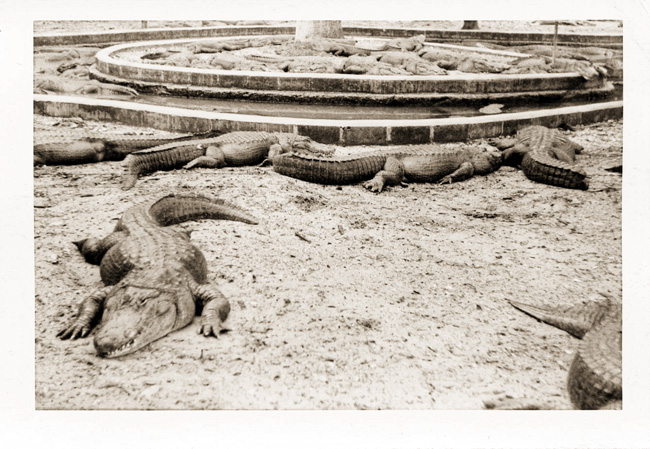 After the seas retreated, the American alligator crawled out of the muck, a living fossil dating back maybe 230 million years.  Virginia’s Great Dismal Swamp, a peaty bog treed with cypress and sweet gum and Atlantic white pine, is much younger, likely less than 9,000 years old, a remnant of the last Ice Age.

In 1763 George Washington formed a land speculation company to drain and settle the swamp where alligators sometimes sunned on logs around Lake Drummond.

Slaves were brought in to timber splintery white pine and cut cypress shingles.  The venture staggered on for a decade until investors lost interest and Washington got busy with the War for Independence.

Later, in the mid-nineteenth century, runaway slaves hounded by tracking dogs slogged through tannic water to safety.  Called maroons, these fugitives found high ground and stayed in the swamp for generations, silent, ghostlike, so the stories go.

In 1953, 190 miles northwest of Dismal Swamp, I sat in a wooden playpen, carefully turning the pages of a cloth book.  A is for Alligator.

Back then I lived in a dark place where I learned to keep quiet and not make ripples.  Whatever happened to me between ages two and five remains submerged, murky.  If I look sideways, I might catch the whip of a reptilian tail.

Some stories are too scary to tell.  And not all monsters are made up.

This is an assignment from an online class I’m taking: Writing the Essence: Memoir in Poetry and Flash Nonfiction.  I began writing a montage of facts without any idea where I’d wind up.  I’m in love with a new form of writing.

6 thoughts on “Alligators in the Swamp”