Meet the Boys . . . Faulkner and Edison! 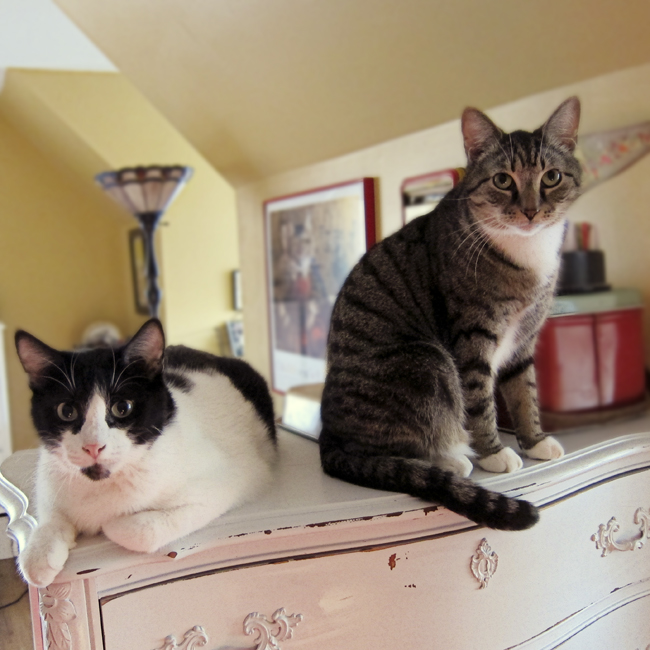 The November afternoon I took Atticus to the SPCA, I didn’t leave empty-handed.  I brought home two boys because a house without a cat isn’t a home.  They were in the same condo at the shelter, but their stories are very different. 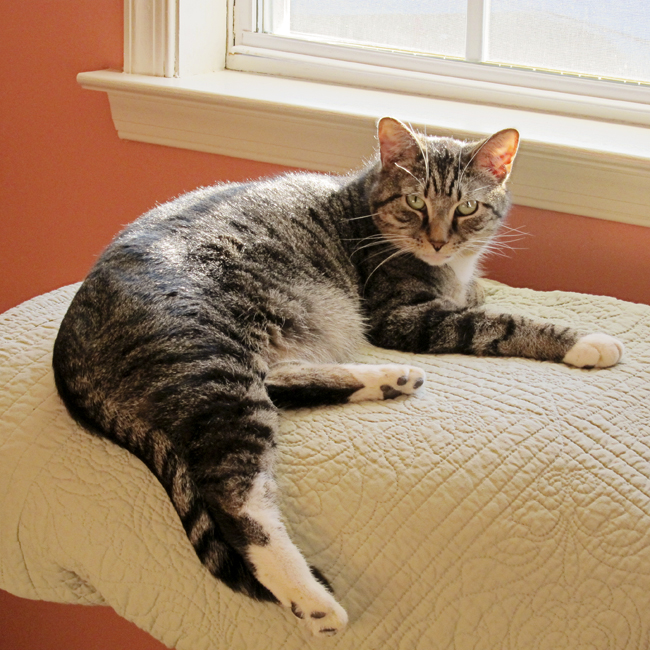 This is Edison (my name—at the shelter he was called Yogi Bear).  His picture and story on the SPCA website tugged at me.  If ever a cat needed a home, it was Edison.  He and his siblings were brought in as tiny kittens.  They were fostered a month, then taken back to the SPCA.  One by one, Edison’s siblings were adopted.  But not Edison.  Never Edison.

Months went by, then years.  Edison stayed in the condo with four or five other cats that came and went as they were adopted.  No one looked twice at the quiet brown tabby.  When I entered his condo that day, he looked at me from his bed, then away.  He had no expectations.  Why should he, after two and a half years?  His life was his bed, a shared food dish, a scratching tree, and shared litter box.  A glass door where people peered in but always passed him by.

That brown tabby was mine.  When I told the shelter people, you could hear them down the halls.  “Yogi’s being adopted!”  I brought him home first because his adjustment was the greatest.  In my office, he immediately ducked under the dresser. 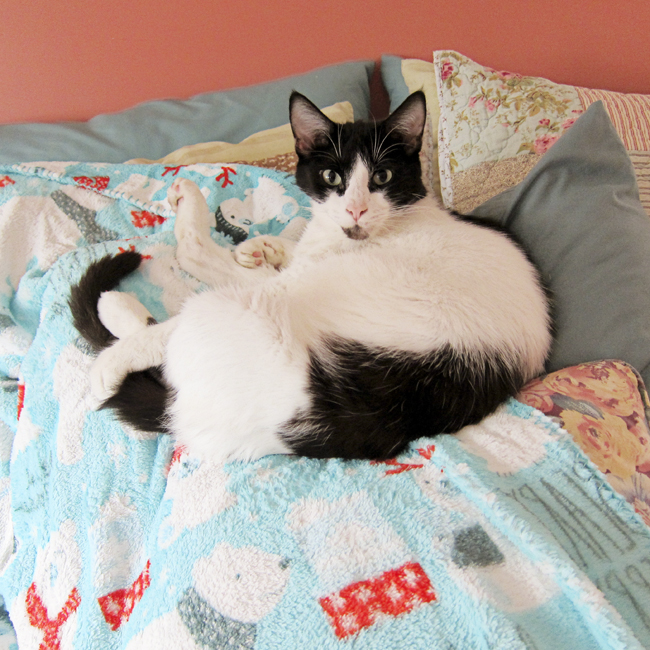 Then I went back to the SPCA for a second cat.  “Blackie” was so new, only there a week, his picture and story wasn’t even posted.  I never learned why he was surrendered.  Faulkner, as I named him, is the opposite of Edison.  Outgoing, a love muffin.  He went in my office with Edison, still under the dresser, and settled right in.

Within hours, I began to figure out why Faulkner had been given up.  First, he lied about his age.  He was not “three years old,” but more like six or seven (bad breath and an I’ve-been-around-the-block look in his eyes).  Second, he lives to eat.  All.  Day.  Long.  Third, he talks a lot.  A lot. Meowmeowmeowmeowmeow.  All.  Day.  Long.  Also?  He came with the handy skill of opening cabinets, cupboards, drawers, and doors. 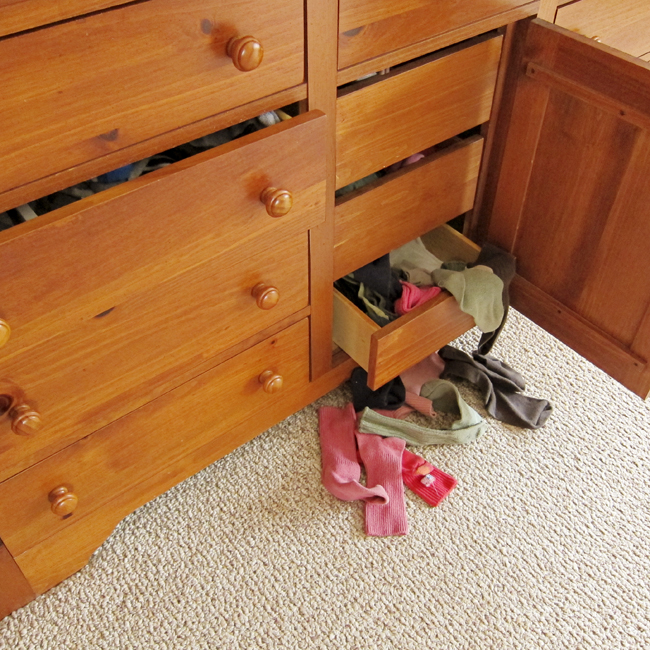 I discovered this when I went in the bedroom and found a dresser drawer partly open, the latched cabinet door that covers the middle section of drawers wide open, and one of those drawers open with socks pulled out.  From the doorway, I could see into the bathroom.  One side of the double vanity cupboard was open.  About that time, Faulkner strolled through the other side.  Now when I come home, I don’t panic because our house looks like it’s been tossed.

Edison was very hinky and shy at first.  Everything was new to him.  Furniture.  Things to smell.  Space to run!  And windows.  The first time he jumped on the windowsill and watched a leaf fall, his whole body quivered with wonder.  I wanted to cry. 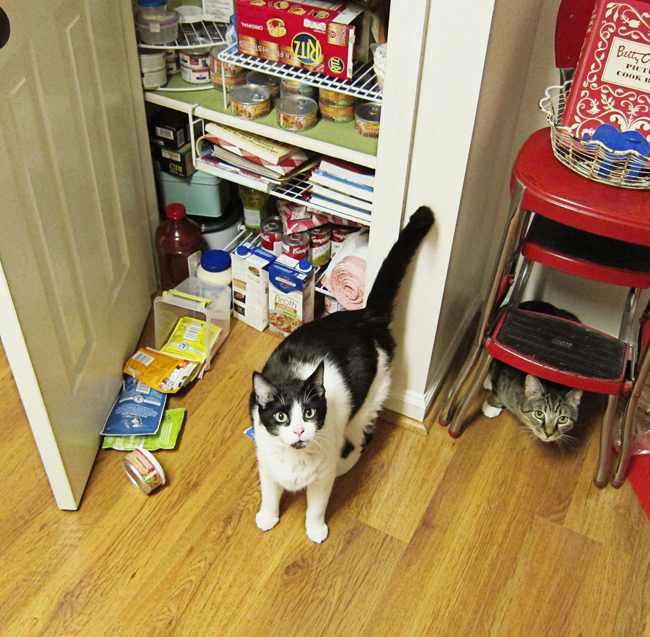 Faulkner showed him the ropes fast.  I swear they conspire.  Edison will whisper in Faulkner’s ear: “I’ll distract her while you get the goods.”

They are best friends and get along great.  In the evening when they tear through the house, it sounds like a rumble.  They stay in my office at night.  At first I wasn’t sure who slept where.  I bought Edison a bed because he was used to one and added soft cat mats in chairs for Faulkner.  At fifteen and half pounds, he can’t sleep just anywhere. 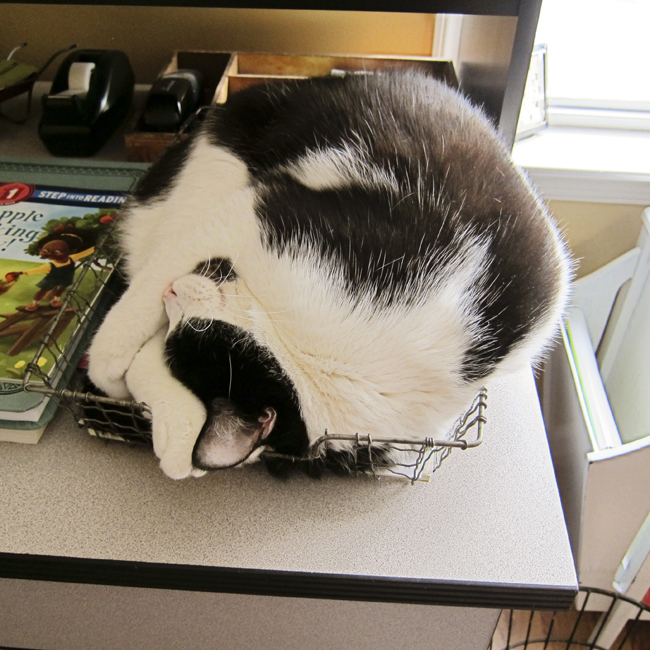 Then I discovered they slept in the same bed.  I imagine this conversation:

Edison:  How much did you eat today? 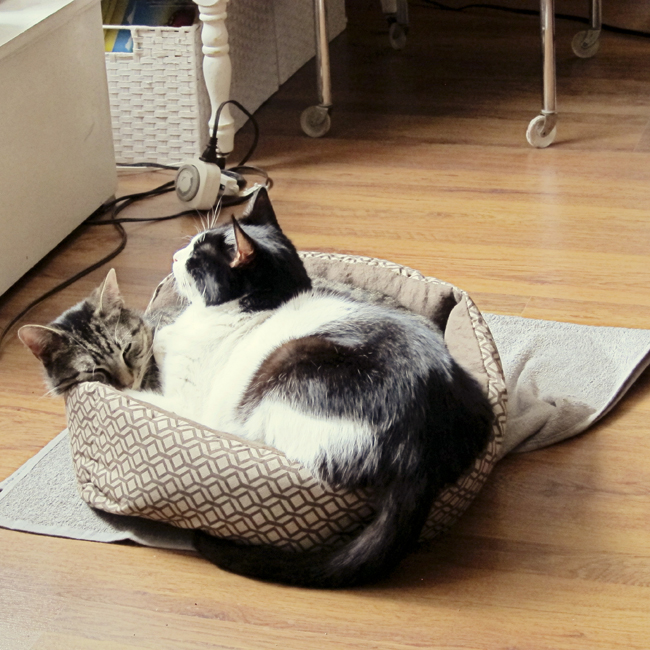 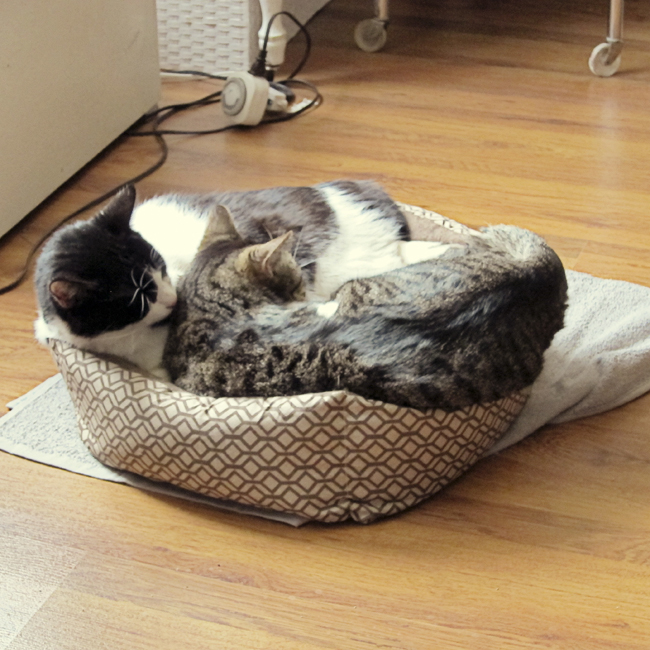 Edison:  You have to do something about your b.o. 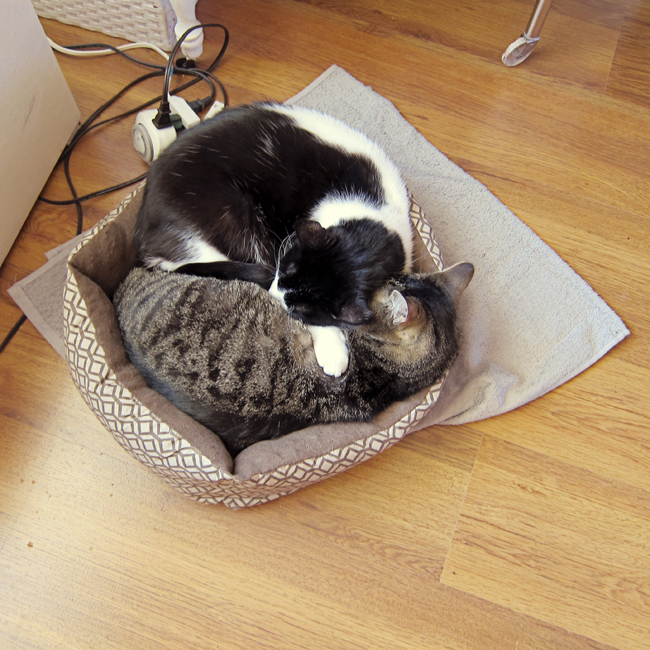 Faulkner:  Be still.  Just be glad I love you like a brother. 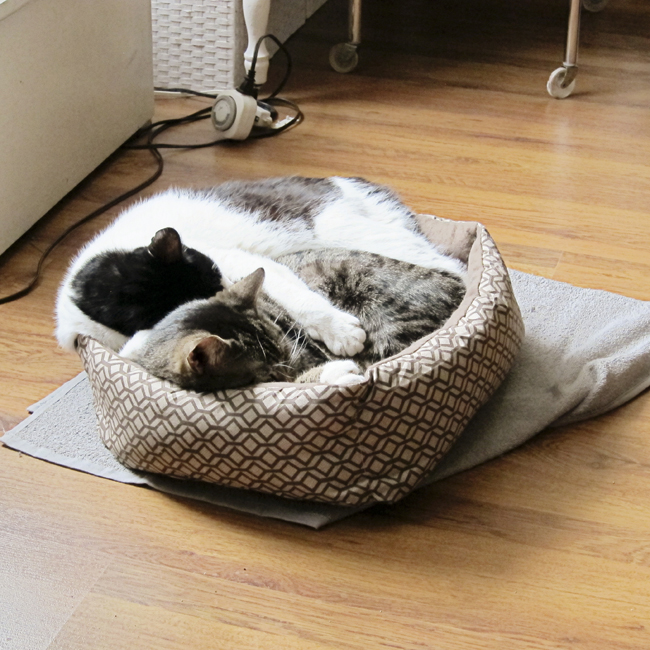 So I got them two beds and pushed them together.  They remind me of Lucy’s and Desi’s twin beds on I Love Lucy. 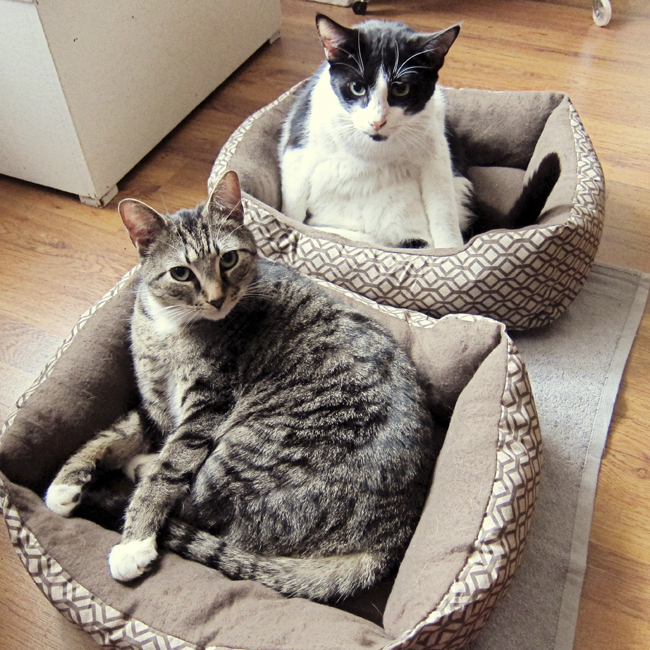 Life in the house with two new cats?  They are always three steps ahead of me and somehow they’ve trained me to feed them like hobbits:  breakfast, second breakfast, elevenses, lunch, tea, and supper. 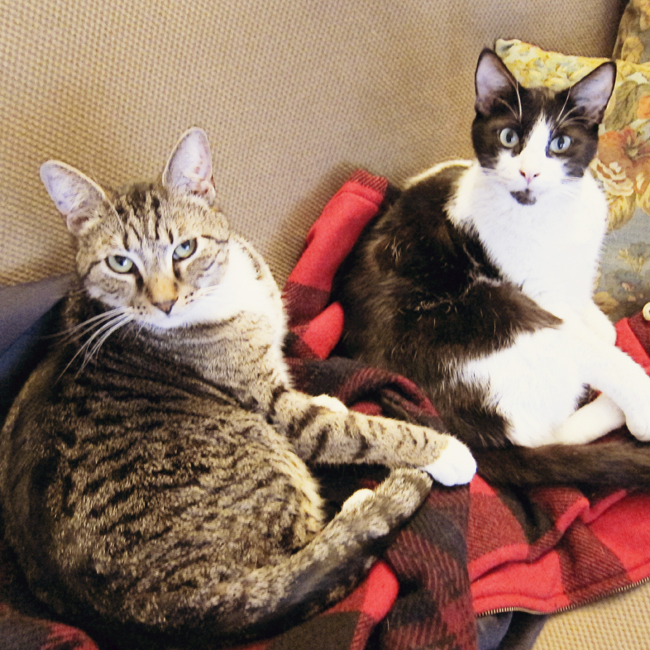 Two people.  Two cats.  Sounds even, but it’s not.  Cats will always keep us hopping!