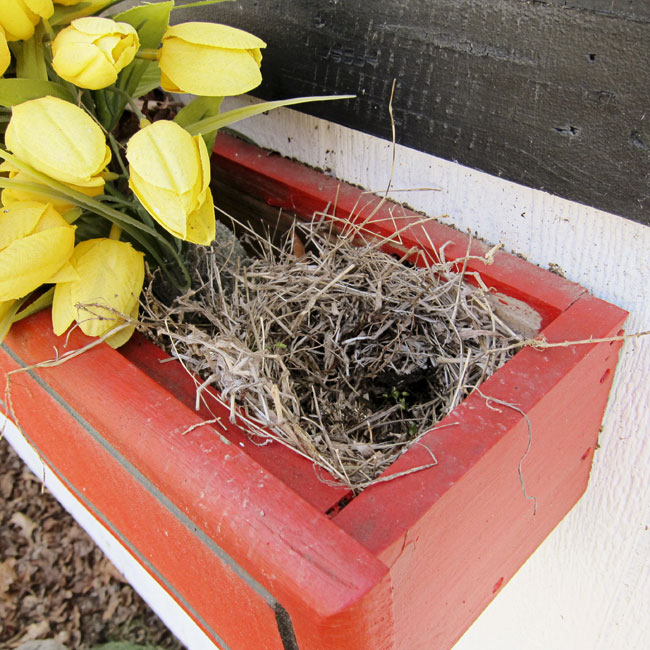 I would never have noticed if I hadn’t been sitting in my husband’s chair at breakfast.  Early April sun poured over the table on my side and I couldn’t read.  (Reading and eating is one of my greatest pleasures.)   I happened to look up from my book, The Signature of All Things by Elizabeth Gilbert, my mouth full of cereal.

I saw a female robin light on our deck rail.  She had a bunch of grass in her beak, much like my flaxseed cereal.  She flew to the window box on our shed then stuffed the grass in one corner of the box with a lot of awkward flapping.

She’s building a nest! I thought, delighted.  And in full view of where we take all our meals!  I practically had to lash myself to the chair to keep from running outside.

A few days before, I’d spent the entire weekend raking five years of leaves out of an area we call the bird garden.

That rather grand name describes a stand of random saplings—a struggling dogwood, a bully of a cedar tree that’s so ugly I threaten to cut it down, a scraggly native holly and two holly bushes we planted—all ringed by mature sweetgum and hickory trees that drop millions of gumballs and hickory nuts.  The unlikely group of saplings was “planted” by birds so it’s fitting the area is theirs.  The garden contains a birdbath, feeders, and the cat angel statues and plaques that mark the graves of Xenia, Mulan, and Persnickety.

That weekend I raked and bagged and pruned and swore—getting pricked in the butt by holly bushes and slapped in the face by that ugly cedar was hardly my idea of a fun time.  I picked up an entire truckload of sticks.  The next truckload was filled with leaves.  We needed mulch but everybody else had the same idea and by the time we got to Home Depot, there were only six bags left, three of them torn.  We spread the six bags in the garden, but it was like a teaspoon of water in sand.  The robin may have been sitting on the shed roof, watching us, scoping out the window box as a nesting site.

After breakfast, I went outside with my camera.  I had painted the window box bright red and keep fake flowers in it, depending on the season.  The yellow tulips had been shifted by the wind, leaving a gap at one end.  Just enough room for a nest.

I snapped a quick photo.  The nest was pretty skimpy, just a hollow of dried grass.  I thought the robin had made a poor choice.  The window box is low, with no overhanging roof or protective foliage.  The nest would be open to rain.  It’s also open to a very nosy writer-birdwatcher.

There was little activity the rest of the day at the window box.  Had my presence scared off the female?  The next day I tiptoed out and took another photo.  I didn’t linger, just leaned over with my camera and snapped.  Inside the house, I compared the photos.  Was there any change?  Was that piece of grass on the left in that spot the day before?  Was she going to add mud?  Did she need to since the nest didn’t have to be anchored to a tree branch?  Was she coming back?

Please, stay, I silently begged the robin.  Despite my lifelong interest (obsession) with birds, I’ve never watched a nest being built.  I’ve never seen eggs laid one at a time and then hatch and the hatchlings grow into fledglings.

I need this nest.