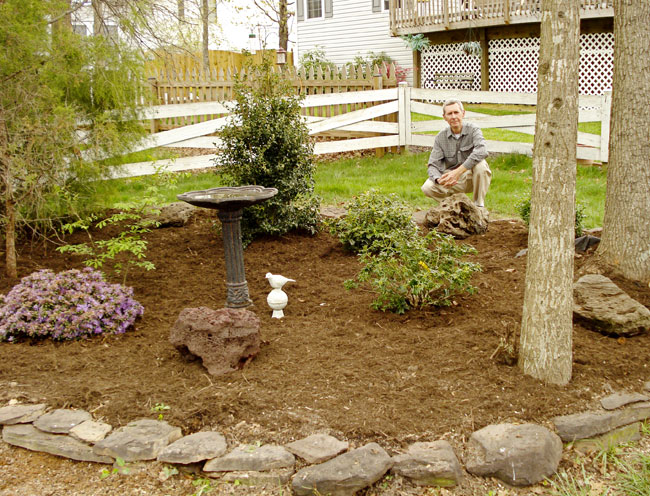 I walked outside to the glorious orchestra of birdsong and budding trees (yes, they sing too).  Two male robins got into a fight, a swirling dance of beating wings and yellow beaks.  The female robin—my nest-builder—flew in low and began tugging at the dead grass.  Her look clearly said, Take it somewhere else, boys.  I’ve got work to do.  She carried the grass back to the window box.  So she was still working on the nest!

The bird garden wasn’t finished.  This was a project I’d dreamed up in April, 2009.  The area was a jungle of honeysuckle, creeper, and weeds.  My husband cleaned it out, added mulch, and bought two holly bushes and a rhododendron, which promptly died.  (Our Rule of Gardens:  plant three, one will die, usually the prettiest.)  The next spring we replaced the fence (plastic! love it!), built the shed, and started the cat cemetery.

After breakfast, we bought a truckload of shredded mulch.  Buying mulch in bags means you have the luxury of spreading it when you want.  Buying a half ton of it loose means you deal with it immediately.  We dragged out spades and rakes began shoveling and raking.  A robin watched us warily from the shed roof.

When we were done, wearing as much mulch as was on the ground, my husband cleaned out the shed, a noisy and disruptive operation if you were a robin eager to work on your nest.  I had bought a chippy, rusted motel chair for a price that nearly made my husband faint.   I wanted something in the bird garden that was different, that the birds could poop on, and use the seat for a feeder.   I made note that the large black leaf keeper that attaches to our lawn tractor and does not work would go next.

That afternoon I weeded the daylily flower bed.  This sounds as grand as the “bird garden”—someone gave my husband seven daylily bulbs which he planted around our light pole.  Daylilies are a bit boring but also no trouble.  Until they get going good, though, chickweed runs rampant.

The sun was bright and strong, as it is in April.  A mockingbird sang on our fireweed bush.  A cardinal cheer-cheered across the street.  A song sparrow, destined to nest in a “dwarf” spruce we need to chop down, sang from the dormer roof.  I realized the sparrows beat us to it again.  The spruce will stay and for the next year I’ll hear people struggling up our walk, saying, “I wish they’d cut these bushes back.”

It’s hard to understand that even in our crummy clay-ey soil, things grow at a ridiculous rate.  The dwarf spruce bushes are almost up to the gutter.  Give a plant an inch and it’ll take an acre.  And it is no small matter to “cut them back.” 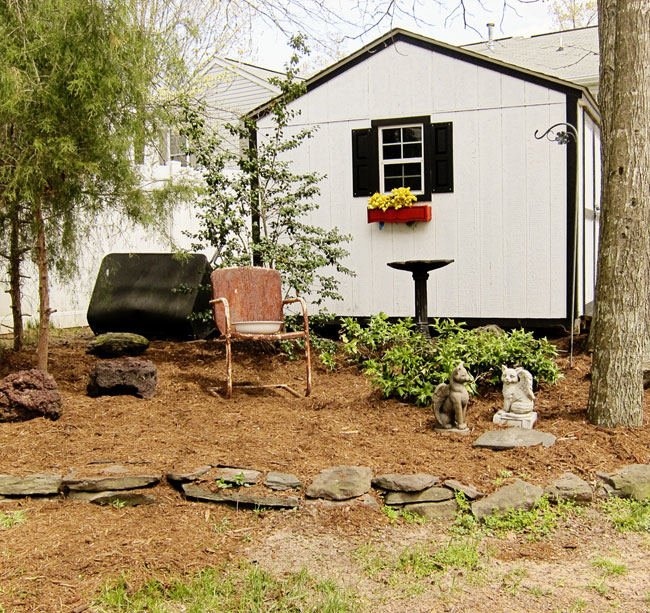 The neighborhood was full of familiar sounds:  Patches the dog barking.  Kids in the cul-de-sac playing and yelling.  Cars pulling up to the stop sign, their radios blaring pop, rap, country.  As I grubbed out a fistful of chickweed, I realized this was home.

It was a notion so startling I sat back on my heels.  We built this house almost 18 years ago.  The house has been decorated and redecorated, painted and repainted, carpets yanked up and hardwood floors put down, furniture, accessories, and different colored towels have come and gone.  We planted azaleas and roses, mowed the grass from April through November.  The house was my home.

But not the place.

I never claimed my neighborhood as home.  I lived in Fredericksburg, but it wasn’t home.  Home was—well, where was home?  It’s not the house we lived in before moving here.  Other people live there now.  The house I grew up in has been torn down.

As I clutched that hunk of chickweed, I thought, “This is my mockingbird, my cardinal, my song sparrow, my overgrown spruces.  My cars playing music, my kids yelling.”

It was an unsettling moment.  I’ve spent so much of my life looking backward to a place I can’t ever go back to, or looking forward to a future that I believed was somewhere else, that I never let myself think, “I am home.”

I carried that thought around with me all day, tight in my grasp the way the robin had carried grass in her beak, afraid I might drop it.