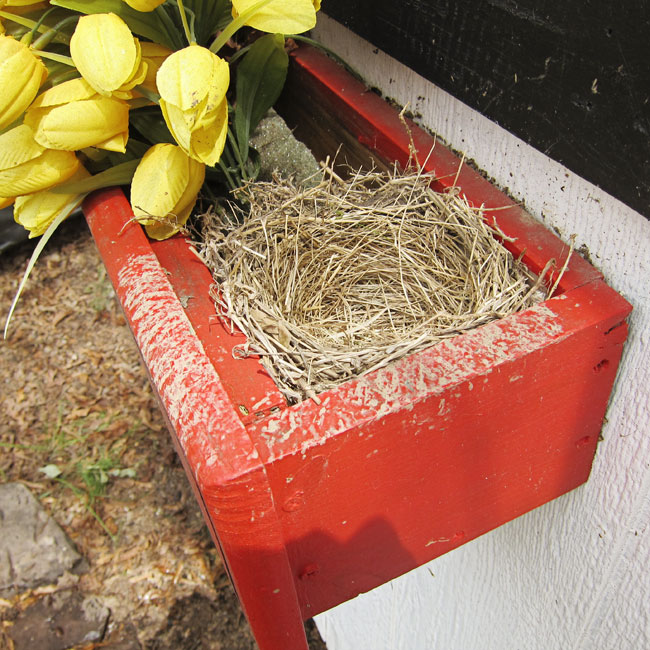 As soon as it was daylight, the robins were working on the nest.  Today they were cooking with gas, no add a bunch of grass and then take the rest of the day off.  They took turns flying straight to the window box.  Normally the female does the actual building, but sometimes the male will help.

So many quick trips were made to the site, I’m sure the male was involved.  After delivering material, they flopped around inside the window box.  It was funny, like watching fat people trying to get out of a bathtub.

But it’s also hard, creating a nest with nothing but a beak, feet, and breast.  I tried to take pictures of this process.  My little Canon wouldn’t zoom close enough, plus I was taking photos through a window screen.

I took two dozen pictures, a fuzzy glimpse of a head, a blurred wing, a tail poking up.  The birds would have been more entertained by the lunatic photographer if they weren’t so busy.  I went out to run errands.  By the time I got back, they were still at it.

I clocked six straight hours of ferrying materials to the window box.  And then they were gone.  Figuring it was safe, I took a bucket of water for the birdbath (my excuse for barging in uninvited) and my camera.  I leaned in.  Ta-da!

I felt as proud as if I’d made that nest myself!  Notice the scratchy mud prints on the sill of window box.  Did they use dirt?  You betcha.  Check the earlier photos from the post two days ago.  No dirt in the first picture.  A little tiny bit of dirt the next. 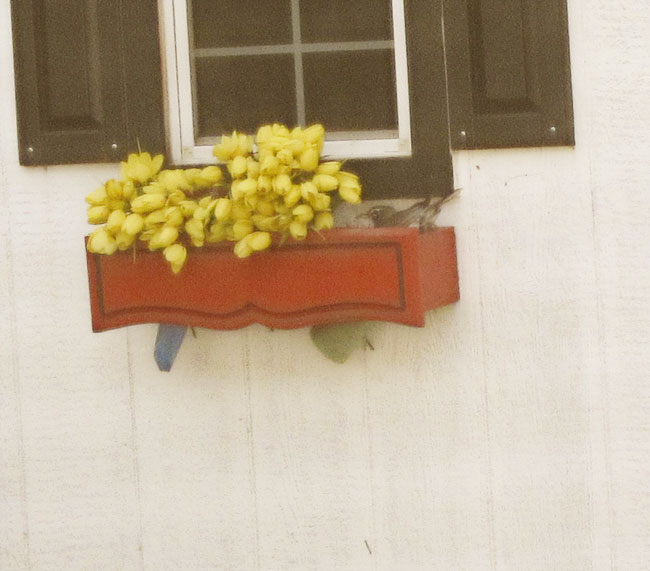 It rained ax handles all the livelong day.  I fretted over that nest with no protective overhang and even considered taking an umbrella out and somehow attaching it to the window box.

I called my husband.  He said he could build a little roof.  Then I realized that birds everywhere had soggy nests.  They probably weren’t happy but it was part of setting up housekeeping outdoors.

I checked the robin’s timetable:  when the nest is ready, the eggs will be laid one day apart for up to five days, and she’ll lay in mid-morning.  The first clutch of the season will be bigger than the second.  She’ll incubate the clutch for two weeks, beginning when the last egg is laid.  That way the eggs will hatch at the same time.  The baby birds will stay in the next about two weeks.

If you want to build your own robin’s nest, here’s how:  www.learner.org/jnorth/tm/robin/BuildNest.html