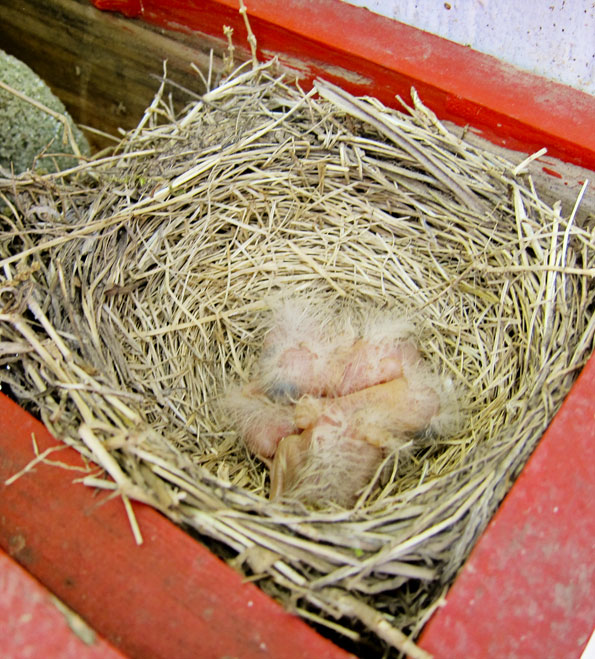 Once again, Zelda has not been reading What to Expect When You Are Expecting.  The last egg was laid Easter Monday.  I figured the first two birds would hatch May 3 (she laid two eggs in one day), the third May 4, and the last on May 5.

This past weekend we went away for our delayed Valentine’s anniversary to Colonial Beach.  I watched ospreys busy in their nests and hoped Zelda was okay.  When we got back Sunday morning, I peeked in the nest.  I didn’t check it on Friday, the day we left, but clearly everybody had been busy while we were gone.

Irene, Howard, Bill, and Esther are here!  They aren’t much to brag about now, but Scott and Zelda think they are beautiful, bulgy black eyes, visible livers, gall bladders, and all.

Looking at the naked helpless little sack-birds reminds me of the burdens I shouldered as a kid.  Too skinny.  Near-sighted.  Crooked teeth.  Chronic allergies.  Picked last in every single game.  Unable to tell time or tie my shoes or ride a bike.

To have one or two of those liabilities is bad enough.  To have them all paints a dreary picture of a scrawny, buck-toothed, adenoidal, uncoordinated kid who tripped over her own shoelaces and never knew if the clock said eleven-thirty or five till six.

Making matters worse, I watched birds, adding another taunt to my lengthy list:  Bony Maroni.  Snaggle-tooth.  Snot-nose.  Spaz.  Birdbrain.  I couldn’t do anything about the other faults but birdbrain I brought on myself.

Why birds?  Because I lived in the sticks and spent most of my time alone.  Birds were always around.  They kept me company.  They fascinated me (“fastinated,” even).  Who doesn’t want to fly?  When I was five, I jumped off our tall front porch with a paper lunch sack in each hand.  Instead of soaring, I landed hard, spraining both knees.

Okay, if I couldn’t be a bird, I would watch them and learn their secrets.  Maybe they’d help me navigate life a little easier.

First, my love for birds made me turn to crime.

In Drug Fair once when no one was looking, I snatched a tiny brown bottle with a parakeet on the label.  I waited with my mother as she checked out, the Hartz Mite Drops burning like a live cinder in my pocket.  Outside it was dark.  My pale face reflected in the plate glass window didn’t reveal a wrinkle of guilt.  Yet at home I hid the bottle under my mattress and tossed every night like the Princess and the Pea until I threw it away.

Next, my love for birds turned me into a liar. 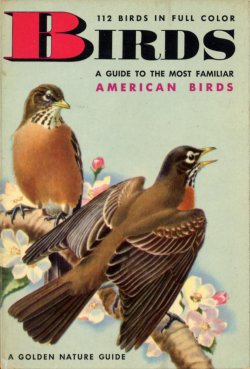 I bought the Golden Guide Birds and studied it like I was passing the bar.  The book recommended keeping a list of birds sighted.  I converted my mother’s address book into my Life List, which is larded with lies and doctored more than the ledgers of an Atlantic City mobster.  Vesper?  I don’t think so.  The “R.B. Grosbeak” (rose-breasted grosbeak) I claimed to see at the “edge of Woods” was most likely a house finch. 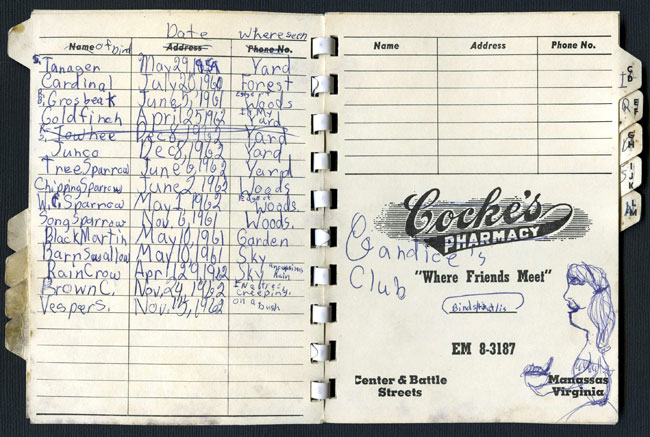 I collected nests and feathers and egg shells and lined them on my bookcase, to my mother’s horror.  “Lice infested!” she screeched, even after I cooly informed her lice vacated nests as soon as the bird hosts did. 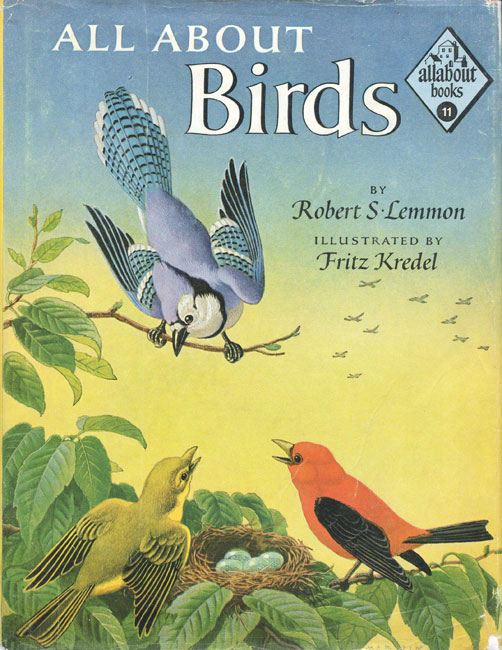 In fourth grade I wrote a letter to the author of All About Birds, a book I’d checked out of the library so many times, the librarian should have given it to me.  Clearly I was into facts:  “I am a yard and 13 in. tall” (I didn’t mention I only weighed about 40 pounds).  I remember conducting that earth-shaking experiment.  I stood in our pink-and-black tiled bathroom, tied  thread around a straight pin and a down feather plucked from my stepfather’s pillow, then dropped it in the sink.  Madame Curie, stand back. 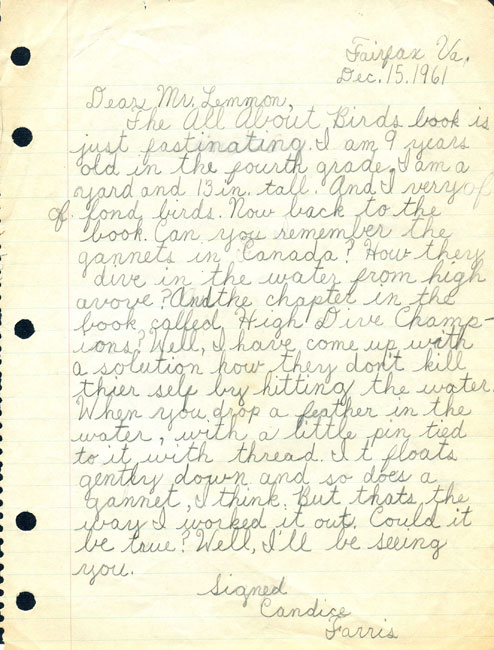 As an extra flourish, I made Mr. Lemmon a Christmas card (a trace of green glitter remains).  But I was stymied where to send it.  The world would never know a brilliant nine-year-old figured out how gannets in Canada don’t “kill thier self by hitting the water.”

When I was ten, I saved enough Top Value stamps to buy my first pair of binoculars.  My too-close-together eyes paired with a bulging astigmatism made viewing through regular binoculars nearly impossible.  But I carried them with me anyway.

Sometimes people were impressed by my encyclopedic knowledge of birds.  “What kind of a bird is that?” one of my cousins would idly ask.  “A grackle,” I’d reply crisply.  “Notice that it’s bigger than a starling and doesn’t have those yellow speckles on its feathers.  The grackle has a wider tail and a yellow eye—”  “Yeah, okay.”

I stayed in Birdland until seventh grade.  By then I’d decided I would become an ornithologist (and a mystery writer) only I didn’t know how to pronounce it.  In our unit on occupations,  I told my teacher I wanted to be an “or-nee-thee-o-lo-gist.”  She didn’t know what the heck I was saying and put down “forest ranger.”

By eighth grade I realized my love for birds, along with my homemade clothes, would never net me any friends.  I started haranguing my mother for store-bought outfits or reasonable facsimiles of Villager blouses and skirts.  I put away my binoculars, passed my bird books to my niece, and tossed my nest and feather collection.  Time to give up birds.

Well, I’ll be seeing you.

Eventually I gained weight, learned how to tell time (digital clocks!), smiled with my lips closed, got allergy pills, rode a bike, and decided team sports were overrated (give both sides a ball and send them home). 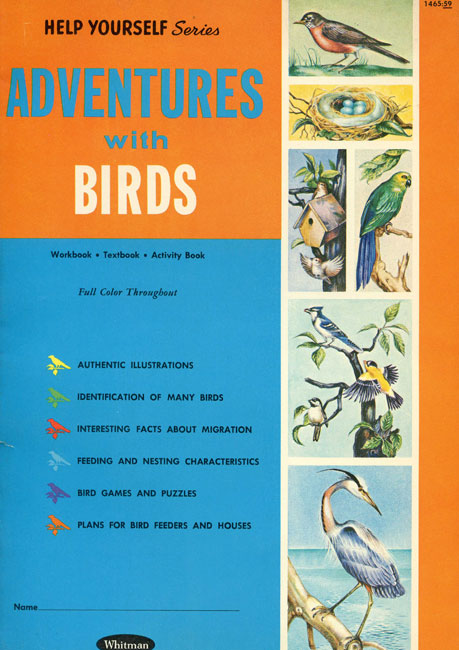 But birds didn’t give up on me.  They were always there.  Waiting to keep me company.  Willing to reveal their secrets.  Our adventures continue.