The Idea of Birds and Other Small Dreams 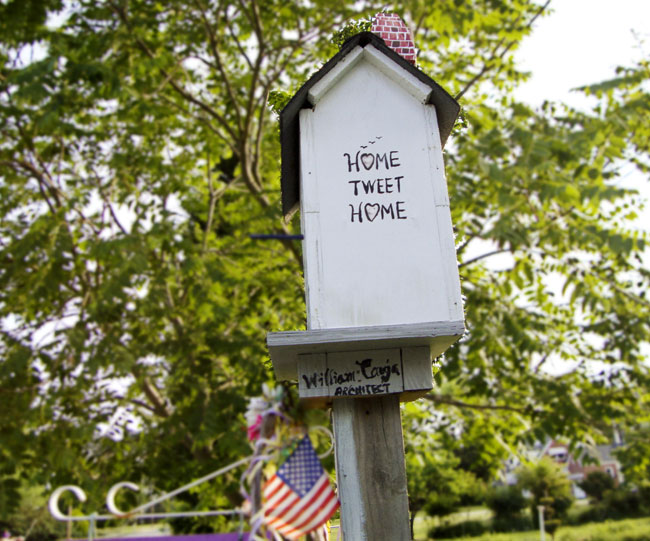 Last weekend at my revision retreat in Luray, I remembered a dream I once had.  My mind was relaxed by being in a different environment.  A window-crack of space opened and a sleeping memory slipped in.

When my husband and I were first married, I was filled with dreams of our future.  Some were silly, like flying to Paris on the Concorde for a café lunch of chilled white asparagus with shaved prosciutto, and flying back home on the Concorde before supper.

Then there was my dream house, a Victorian farmhouse.  I built a two-story kit dollhouse with gingerbread trim and curved shutters I glued on backward.  I painted the exterior sky blue and drew hearts on the backward shutters, papered the rooms in a cabbage rose print and furnished them with a miniature Hoosier cabinet and “iron” bedstead.  My mother stitched tiny gingham curtains.  I glued a chip of wood over the front porch that said Bramblewood Cottage, and was ready to move in.

My husband and I never shrunk to three inches and we aren’t living in a sky-blue Victorian farmhouse, but we do have a big front porch and shutters that are hung properly.

At the Mimslyn Inn in Luray, somewhere between the exercise on setting and the cookie break, an older dream fluttered through my mind.  The library I was going to create, a dollhouse of a library just for children.

In the early 70s, I stumbled on the Noyes Children’s Library in Kensington, Maryland.  Founded in 1893, it is the oldest public library in the Washington Metro area.  Noyes became a children’s-only library in 1969.  When I discovered the mansard-roofed cottage, I was enchanted.  I stepped into a single room with low bookshelves filled with picture books, a rocking chair, and soft rugs on the floor.  I was ready to move in.

The idea of a library just for children stayed with me for years.  I dreamed of starting my own children’s library, a cozy cottage nestled in the foothills of the Blue Ridge.  The big front room would be the domain of little children, but I’d add a second room for the deep reading age of eight to eleven year olds, with carpeted levels, like a tree house, and wide windows to encourage daydreaming.

My husband and I discussed the little library in earnest.  We studied floor plans and I drew sketches.  When we drove into the mountains on day trips, we scouted locations.  Standardsville?  Crozet?

Last weekend, I glanced out the sunroom windows where our retreat was held, took in the slopes of the Blue Ridge rising behind us and the Massanutten range tumbling across the valley, and wondered where that dream had gone.  It had gotten lost in thirty-five years of moves and work and losses and health issues and money troubles.  I felt sad.  Such a sweet dream, so unselfish, it should have materialized from goodness alone.

And then I recalled the martin birdhouse my stepfather built for me when I was ten.  In Manassas, where we did our weekly shopping, I’d noticed apartment-style birdhouses for purple martins in people’s backyards.  We could attract those lovely martins, too!

My stepfather constructed a huge two-story martin apartment house, painted it white, and mounted it on a sturdy pole just inside our woods.  I haunted the spot, waiting for birds to move in.  But they never did.  Not one single bird. 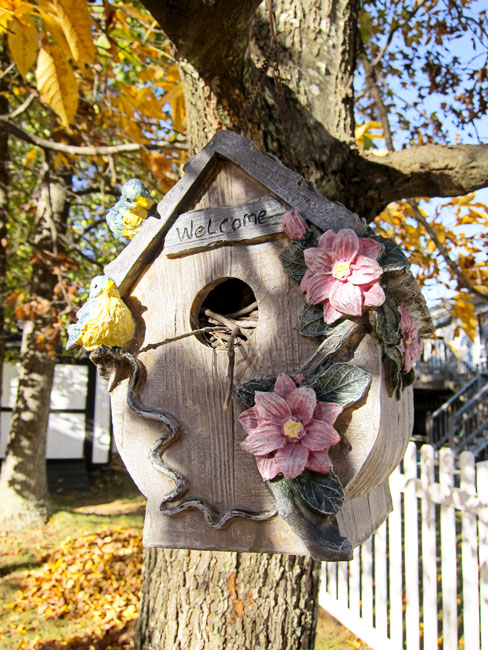 Year after year the martin house remained vacant.  The paint flaked.  The roof peeled.  It was the saddest sight, that unlived-in house, built with anticipation and hope and the best of intentions.  Later I realized purple martins are aerialists, catching gnats on the wing, and prefer their homes away from tall trees.

When we moved into this house, I hung a birdhouse from a hickory tree branch, never dreaming any self-respecting bird would move into a gaudy ornament from Lowe’s.  Imagine my surprise last fall when I was raking leaves and glimpsed sticks poking out of the hole.  Some bird family had actually nested in it!

Recently the Universe sent me something I didn’t know I needed until it was in front of me:  a photo essay by Rob McDonald called “Birdhouses.”  McDonald photographs spaces, like the homes of famous Southern writers and the more humble abodes of backyard birds.  I was drawn to his images of miniature houses set at the edges of fields, made by hand, put up with the best of intentions.

When asked why he kept building birdhouses that were never used, one man told McDonald, “I guess I just like the idea of birds.”

I will never make the cottage children’s library happen.  Yet now I can let the idea fly away knowing it’s okay to dream small dreams while tending the bigger ones.

It’s enough to face each day with anticipation, waiting for the flash of a bluebird as I take up my current project.  I’m building a new place there, a new world to move into, in the hopes my readers will want to come, too.

12 thoughts on “The Idea of Birds and Other Small Dreams”