What I’m Reading: The Third Mushroom 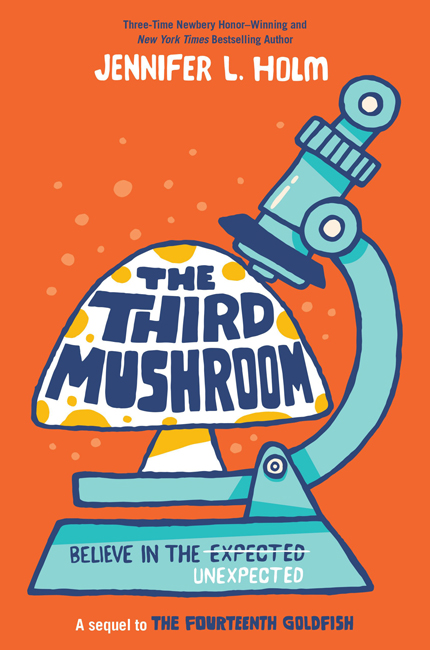 I’m a huge fan of Jennifer L. Holm’s books.  I’ve taught her Newbery Honor historical middle grade, Turtle in Paradise, in my writing classes.  And The Fourteenth Goldfish will be a mentor text in my week-long middle grade writing intensive (next summer, Hollins University).  I loved the idea of a scientist grandfather who finds the secret of turning back the clock.  He lands in Ellie’s life as a nerdy teenager with a powerful discovery.  Suppose everyone could enjoy the fountain of youth?

I read the sequel, The Third Mushrom, twice: once, for enjoyment (it doesn’t disappoint as a sequel), and again to examine Holm’s amazing plot threads.  Grandpa Melvin has been gone since the end of the previous book, but lands back in Ellie’s life.  He’s a bit older now, going through “the Puberty,” to his everlasting disgust.  Imagine if we all had to go through that twice!

Ellie hasn’t been standing still during Grandpa Melvin’s.  She’s older, too, with a new stepfather, a Goth best friend, Raj, and her own interest in science.  Grandpa Melvin is now in her school (he can drive, but he’s too young to get a license or a job or an apartment—turning back the isn’t all it seems) and is mightily bored.  After all, he has two PhDs.  Middle school doesn’t cut it.  But he and Ellie team up for a science fair project involving fruit flies and something strange Melvin found while he was traveling.

Middle school life as portrayed by Ellie, who isn’t sure if she can be friends with her old best friend since kindergarten, Brianna, or if her new best friend could also be her boyfriend, has the genuine up-and-down feelings.  Grandpa Melvin has all the traits of a fourteen-year-old boy (dirty laundry, sleeping late), along with his old-man grouchiness.  Dialog is brisk and funny.

There is much to chew on in this book:  the importance of science, the relationships between Ellie and her friends, and Ellie and her family.  Underneath the humor and middle school angst is this valuable nugget, revealed when Ellie and her grandfather are talking about the death of the grandmother who died of cancer before Ellie was born:  no matter how much we know, no matter how many advances we make in science, we cannot always alter the outcome.  Grandpa’s two PhDs could not help him save his wife.

If you’ve read The Fourteenth Goldfish, you’ll love the sequel.  If you haven’t read it, read it first, then savor the sequel.

1 thought on “What I’m Reading: The Third Mushroom”